Ants are considered to be the most successful and most abundant groups of insects on earth. For this reason, ants are the most commonly reported pest in both the home and workplace. Not only are ants the most common type of pest encountered, but they are also one of the most persistent pests. Although ants are frequently seen indoors, the majority of ant activity occurs outdoors where they forage on small insects and other small organisms. In the Dallas area, the most common ants that homeowners and businesses experience are odorous house ants, red imported fire ants, carpenter ants, Argentine ants, acrobat ants, pharaoh ants, and crazy ants.

What kinds of ants live in Texas?

Odorous House ants are small, about 2.4 to 3.3 mm in length, and dark brown or black in color. Interestingly enough, if you squish them, they’ll smell like coconut. They can be found invading homes in very large numbers and will forage for food day or night. They can nest just about anywhere and those nests can be very large in size, which can make them difficult to control. Odorous House ants like sweets (especially plant nectar and honeydew, which comes from aphids) and are harmless. You’ll probably encounter odorous house ants trailing in your bathroom or kitchen. They are not known to cause damage, bite or attack humans, leaving them to be more of a nuisance than anything. 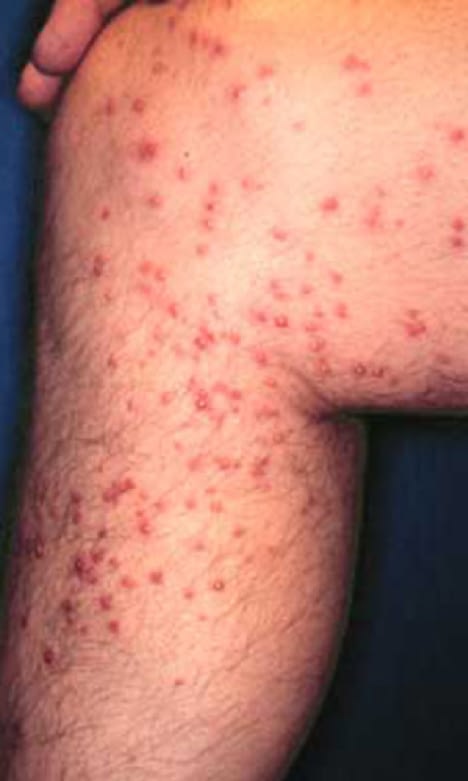 According to the Texas Imported Fire Ant Research and Management Project conducted by Texas A&M AgriLife Extension, there are 6 known species of fire ants, five of which are found in Texas. The most common type of fire ant that you’ll run into is the red imported fire ant. They were introduced to the United States in the 1930’s and then spread through southern states spanning Florida to California. Once they choose a nesting site, visible mounds are created amongst moist soil. You’ll usually find these mounds on your property or hidden under rocks and bricks. Red imported fire ants are aggressive and have the ability to sting, resulting in pain, swelling, and anaphylactic shock for those who are allergic. 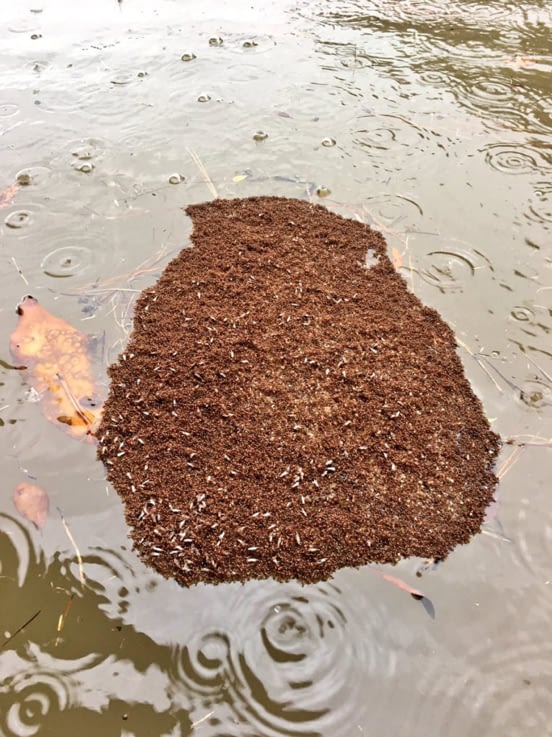 The unique thing about red imported fire ants is that they have found an interesting way to survive flooding conditions. If rainfall is too high, red imported fire ants will form a ball shape and float like a raft until dry land is found. These ants are extremely adaptable and resilient in the face of lack of food (they will eat almost anything) and inclement weather.

Carpenter ants are wood-destroying insects that are commonly found in Dallas, TX. These are large black ants that tunnel into wood by chewing it and spitting it back out. Unlike termites, carpenter ants do not eat wood. One of the easiest ways to identify a carpenter ant infestation is by finding what looks like small piles of wood shavings, called “frass”. Frass is the wood they have displaced by forging new paths. Their pathways look like smooth, round tunnels and can exist anywhere they nest. Carpenter ants are typically drawn to wet wood as opposed to dry wood. This means that they can be found in places such as damp wood in decks, door frames, window frames, and occasionally insulation. Although they do not cause extensive damage like termites would, their presence can lead to greater issues if left untreated for a long period of time.

Argentine ants are an invasive species, originating from Argentina and Brazil, which now live in the Dallas & Fort Worth area. They are various shades of brown and about 1/8 inch long. Argentine ants create large colonies in soil, mulch, under stones, and tree cavities outdoors. When they cross into human made structures such as office buildings and residential homes, they pop up in high moisture areas like sinks, potted plants, and in kitchens where food is abundant. Just like humans, Argentine ants love sweets. Accessible sugary foods can include almost anything that isn’t in an airtight container. These tiny pests can also cause large amounts of damage to electrical equipment when they explore outdoor electrical boxes and electrical sockets. Argentine ants are especially difficult to deal with because they rapidly multiply, with colonies that can contain 1,000,000 ants. 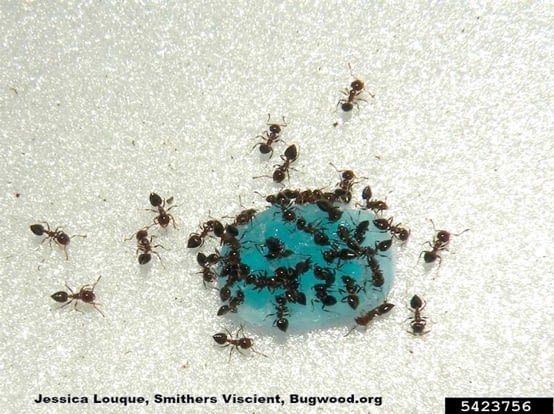 Pictured Above: a group of acrobat ants gathered around a spill

Acrobat ants are not typically found inside homes, but do wander in from outside (especially if there are tree branches touching the house or utility lines). In this case, they are considered occasional invaders. If acrobat ants are indoors, you can usually find a small pile of very fine sawdust. They will not consume wood, but will chew through it in order to build nests like carpenter ants do. In this case, they are considered structural pests. Nests located outdoors will typically consist under rocks, in logs or firewood, or trees where the weakened wood is soft enough for them to form galleries. They are known to nest in abandoned termite and carpenter ant nests, as well.

Pharaoh ants are tiny orange and honey colored ants that many homeowners in the Dallas, TX area have to deal with. Their nests can be in light switches, wall voids, baseboards or any other crack in the house, which can quickly lead to damage and dangerous situations. Most other ants may be all over the house but they do not usually invade items within the home. Pharaoh ants will be seen walking all over the walls in large numbers. Each colony contains approximately one million individuals. If you have overgrown vegetation close to or coming into contact with your home, wood mulch close to your home, fallen food crumbs indoors, or moisture problems, pharaoh ants can infest. Because they are so strongly attracted to moisture, a pharaoh ant infestation could mean you have problems with clogged gutters, poor grading, roof leaks, and wood rot. 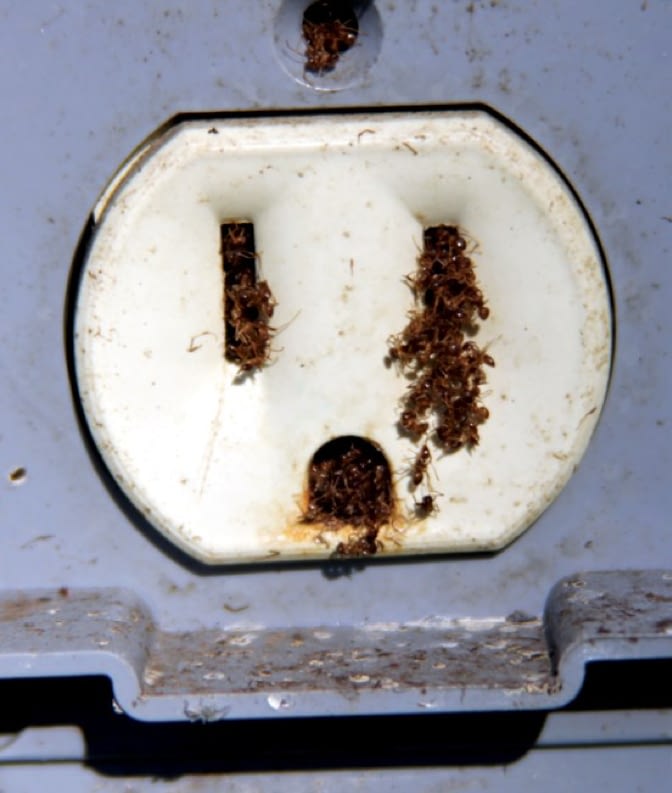 Tawny crazy ants, also referred to as Rasberry crazy ants, were discovered in Texas at a chemical plant in 2002 by pest control technician Tom Rasberry. Why crazy you ask? They’re called “crazy” because of the way they move: fast and erratic. They are about 1/8 inch long and reddish-brown in color. Extremely large amounts of tawny crazy ants can enter homes through garages, cracks in the foundation of the home, and wall voids. The main concern with tawny crazy ant activity is the fact that they are strongly drawn to electricity. External AC units, electrical outlets, and electrical boxes are common areas that tawny crazy ants invade. Electrical equipment can short circuit and they can congregate in electrical outlets causing malfunction. If you find massive amounts of small, red ants around your home, call Certified Termite and Pest Control immediately to avoid dangerous situations.

Why do I have ants in my house? 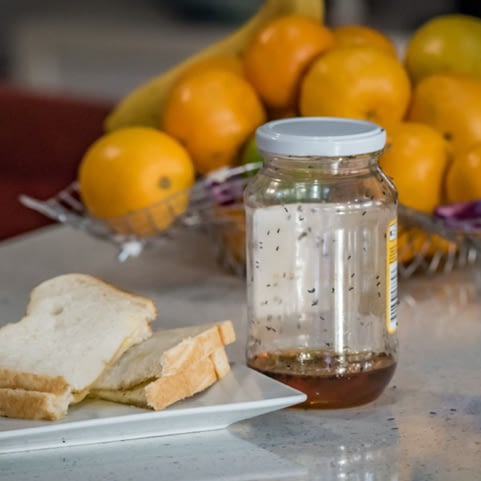 Most ants create colonies where they can thrive which means they are constantly in search of a food source for survival, which can lead them into your home. A kitchen is a perfect area for ants to infest with the potential for crumbs, dog food left in bowls, penetrable food packaging, and food such as fruit left out on tables and counter tops. No one wants to find pests in their home, but it can happen to virtually any homeowner.

Ants typically live outside, sending scout ants away from the colony to search for food. These explorers are usually the ants that you find in your drain, on the floor, and around food items. Human food is also appealing to ants. Once the scout finds a food source, they signal other ants to follow his trail and continue to take food and bring it back to the colony. The number of ants following this same trail grows as their food source remains available.

The biggest concern with ant infestations within your home is the potential for disease. Ants are constantly moving back and forth, indoors and back out, picking up germs along the way. This means that bacteria living on the ground or in your pipes can surface and spread if ants cross your food. Odorous house ants are the most likely to cause infection because of their specific attraction to sugary and greasy foods such as cookies and chips. By crawling across your food, they can spread salmonella for you to ingest. The best way to avoid these situations is to engage in proactive ant prevention measures and professional ant control services.

Fire ants can be especially dangerous when coming into contact with humans. They are highly aggressive and will not hesitate to sting, releasing their natural venom. To make things worse, PestWorld.org states: “But rarely will someone be stung by a single ant. More likely, a person stung by a red imported fire ant will receive multiple stings from multiple ants defending their nest.” Those who are allergic can be sent to the emergency room.

How can I get rid of ants on my own?

Nobody appreciates unwanted visitors, especially when those “visitors” are ants crawling along your countertops while you have guests over for dinner. With the internet busting at its seams with various DIY tactics and tricks for anything and everything, what does it take to make ant DIY remedies work? When it comes to the most common type of house invader, the odorous house ant, bait placement is critical. Where you place the bait can determine if it will be a success or not. Just like spraying repellents, bait placement along ant trails (that include lines and edges) would be the first place to start. Follow the edges along baseboards and place your bait in a corner along that baseboard. You may also find ants crawling along the edges of your backsplash, if this is the case, place bait near those edges. If you already know the ant trail, start there. For instance, if you know you’re seeing ants in your kitchen near your dishwasher, perhaps start by spraying along the baseboards leading to that location. If there are any cracks or crevices, be sure to include those because they might be entry points for the ants. The most common reason DIY ant control fails is the misplacement or incorrect application of products. If you can’t get ants under control, contact a pest control professional.

How can I prevent ants?

Use the following simple tips to prevent ants in your home.

Why do I have ants in my kitchen?

Your kitchen is the most common place to find nuisance ants. They are attracted to resources such as food and water to keep the colony alive and growing. Inevitably, your family will end up dropping small crumbs after snacks and meals without knowing it. Unless you are hyper vigilant about cleaning and sweeping your floors, crumbs are bound to exist. Even if you use extreme care, keeping your kitchen floor clean, ants are also attracted to other food sources that you may not realize.

Pet food bowls are a perfect way for small ants and other pests to thrive in your kitchen. Throw away uneaten pet food or lift it away from the floor into a sealed container at the end of each day to avoid this scenario. Ants and other pests can easily find pet food in poorly sealed containers such as the large paper bags that they come in. Frequently dumping water from their bowl can deter ants even further. Be sure to also clean the area around the bowls since dogs and cats aren’t always the tidiest when it comes to eating and drinking, and they create crumbs and water droplets that attract ants.